In recent years, we have heard many stories about yearly bonuses offered to CEOs of large companies. While the economy melted down in 2008, stories revealed leaders of companies reaping enormous bonuses in addition to their base pay, while rank and file employees saw lower wages, fewer hours, and less comprehensive benefits. Naturally, these revelations sparked outrage. Why should those at the top be rewarded for, in many cases, heading up failed enterprises? Part of the reaction to this controversy was a retooling of corporate social responsibility csr programs. Instead of aligning themselves with particular causes, companies found they needed to intertwine their entire operation with their responsibilities to stakeholders and the environment.

UK department store John Lewis is a company that built corporate social responsibility csr into its mission even before the term was invented. The first John Lewis store opened in 1864. Store executives receive bonuses, but so do all the employees. Each employee, from the sales floor to the boardroom, is a part owner of the company. They are even called partners instead of employees, from the time of hiring.

This amazing innovation means that each and every partner receives the same bonus. Bonuses go up and down year to year based on company performance. This brilliant model rewards everyone while motivating employees to work hard and stay loyal. If you own part of a company, and you know your reward is tied to performance, you will do everything you can to make sure the company performs.

John Spedan Lewis, son of the store’s founder, signed away his ownership rights in 1929. He wanted to ensure the employee owner model would carry forth into future generations. It has, and the retailer’s commitment to its employees does not stop there. There is a staff council built into the business structure. The council allows employees to share ideas and complaints which can then be addressed to the board. A weekly employee magazine allows workers to share their views on where the company is going. Staffers can share anonymously if they wish.

There is no public outrage when John Lewis CEOs receive their bonuses. In fact, these leaders earn less in annual salary than board members at comparable retail chains.

Part of the payoff is that John Lewis outperforms its competitors in the areas of profit and job growth. During the volatile years of 2005 and 2009, when companies were losing money and sometimes shutting their doors, John Lewis kept creating new jobs. The company’s profits kept pace with the rest of the sector and outperformed in some cases.

John Lewis is a pioneering corporate social responsibility csr company. They do an outstanding, exemplary job of taking care of employees. Their business model is sustainable because it focuses on long term growth instead of making money in the short term. Let’s hope more companies follow the John Lewis example and create cultures of interdependence and job satisfaction. 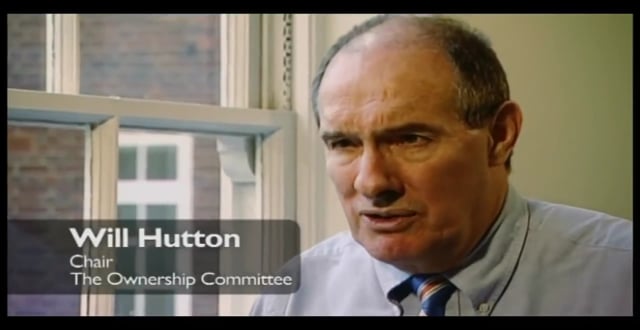 This video shows the benefits of being a co-owned business.

Let Graeme Newell show you how to build and implement a purpose-driven strategy for your business.